Why Some States Keep Schools Closed, Even as Businesses Move to Reopen 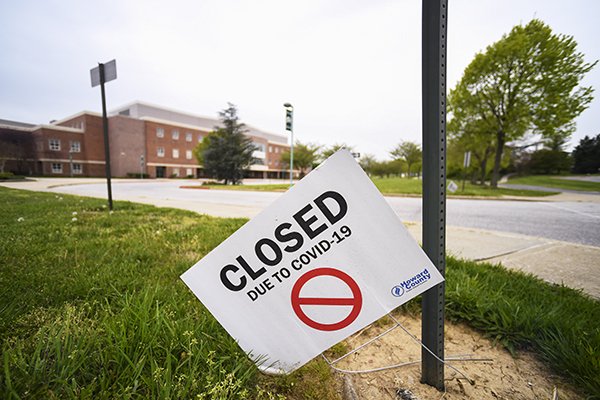 Closed Due To Covid-19 signs are posted outside Wilde Lake High School in Columbia, Md., on April 23.

State leaders eyeing ways to lift coronavirus-driven shutdowns agree that it’s impossible to fully “reopen” a state’s economy when children are home from school, limiting their parents’ ability to return to work.

But even as governors in a handful of states begin easing restrictions on businesses, they’ve left school buildings closed, some extending those closures for the rest of the school year.

Here are some examples:

Here are four factors that make reopening schools a much tougher call for state leaders than allowing businesses to resume operations:

School Is Compulsory, Not Voluntary

In Georgia, for example, many small businesses told local media that they don’t plan to reopen, though they have the freedom to do so.

And states like Montana that have eased business restrictions have still maintained limits, like banning crowds of more than 50 people and requiring minimum distances between work stations and tables.

But school attendance is compulsory. And—even though children appear to be less likely to have symptomatic cases of the coronavirus—families may be hesitant to send them to a building with hundreds of their peers each day where they could become ill or carry the virus back home to more vulnerable family members.

Across the country, state leaders have suggested schools won’t return to “normal” if they reopen their buildings in the fall. In California and Colorado, for example, governors have urged schools to consider how they can promote social distancing in classrooms and avoid crowds in cafeterias. New Jersey Gov. Phil Murphy suggested this week that students may have to wear masks when they return to school.

If these new protocols feel rushed or ad hoc, it may add to families’ anxiety, and some students may not show up. It’s similar to concerns some districts face on snowy days or when more-routine illnesses, like the flu, spread among students.

And in some states, like Florida and Georgia, where discussions have started about easing business restrictions, the numbers of coronavirus cases are still high.

In Montana, where spread of the illness is much more limited, a majority of respondents to an unscientific internet poll conducted by the state’s education department favored keeping schools closed.

In addition to the comfort and safety of families, schools must consider the teachers and staff in returning to work. School districts are the largest employers in many communities, and employees may be concerned about creating a vector for spreading the virus or about growing ill themselves.

Before Florida’s DeSantis announced plans to continue distance learning into the summer, he publicly floated the idea of opening buildings, even for a few weeks. That idea was met with protests from the Florida Education Association.

“COVID-19 presents more questions than answers,” the union wrote in an April 14 letter to the governor. “It also presents a threat that we cannot control. The potential damage that could be done to families and entire communities from an outbreak of COVID-19 at even one school far outweighs the inconvenience of continuing distance learning for the rest of the school year.”

In many states, families won’t send students back to schools until the fall.

According to Education Week’s tracker, 41 states, three U.S. territories, and the District of Columbia have ordered or recommended school building closures for the rest of the academic year. Backtracking on those announcements would be extremely challenging for schools and families.

But, even in states that have left the door open for schools to welcome students back this academic year, the process wouldn’t be easy.

Many schools, concerned about contagion, have restricted staff access to buildings since they closed them to students. Before reopening, they would have to complete time-consuming cleaning. That would give teachers and students very little time to get back into a learning routine before their regular school years are scheduled to end, said Noelle Ellerson Ng, the associate executive director of advocacy and governance for AASA, the School Superintendents Association.

For some schools, the question of reopening will focus on whether to offer extended summer school to make up for lost learning time, not whether to fulfill the current school calendar in person. And some are considering an early start to the next school year: Mississippi State Superintendent Carey Wright said in a USA Today interview that she hoped the state would reopen schools in late July, after the summer break but before schools typically start in mid-August.

Montana districts originally scheduled their last days of school for late May. Even if they decide to reopen, they would have to extend the school year to get more than a few weeks of in-person class time. Leaders of the state’s largest districts posted messages online Wednesday outlining plans to take the decision to their school boards, but some were already considering remaining online, even before Bullock’s announcement.

President Donald Trump has been unclear and even contradictory in his statements about the speed and manner in which governors should ease their virus mitigation efforts.

When DeSantis considered reopening Florida’s schools, Trump insisted in a White House briefing that he had the authority to override that decision. And, while he’s said “the cure can’t be worse than the problem,” Trump said Wednesday he disagreed with Georgia governor Kemp’s plan to reopen businesses.

Yet after releasing federal guidelines April 16 that proposed states ease restrictions in phases, Trump told reporters he believed some governors would open schools “sooner rather than later.”

Education groups have said those federal guidelines don’t provide enough clarity about how to safely welcome students back.

The guidelines, which largely focus on businesses, assume that states will have the capability to quickly and easily test people for the highly contagious illness and to trace their contacts to contain its spread. Many governors and health officials have said they don’t yet have the resources for those mitigation efforts.

The White House plan includes “gating” criteria to govern reopening: consistently declining rates of flu-like symptoms, drops in documented cases of the coronavirus, and adequate hospital capacity for a possible resurgence of illness.

But, even when numbers of new cases and fatalities show sustained declines, questions remain about how to open schools.

The White House guidelines call for three phases of reopening for businesses, schools, and workplaces, with school buildings that have been shut down remaining closed in the first phase.

In that second phase, schools could reopen, the guidance says. But vulnerable people would have to stay home, and that includes people with asthma, a common condition for many K-12 students.

The guidance also suggests that in phase more generally residents should avoid “social settings of more than 50 people, where appropriate distancing may not be practical…unless precautionary measures are observed.”

That last point could be a particularly high bar for schools.

“In the same breath that the guidance highlights a path forward in opening schools, it establishes a scenario where every single school would be in direct conflict with another recommendation,” AASA President Daniel Domenech said in a statement. The group wants guidance that can be implemented “with minimal confusion and with confidence in the science behind it.”